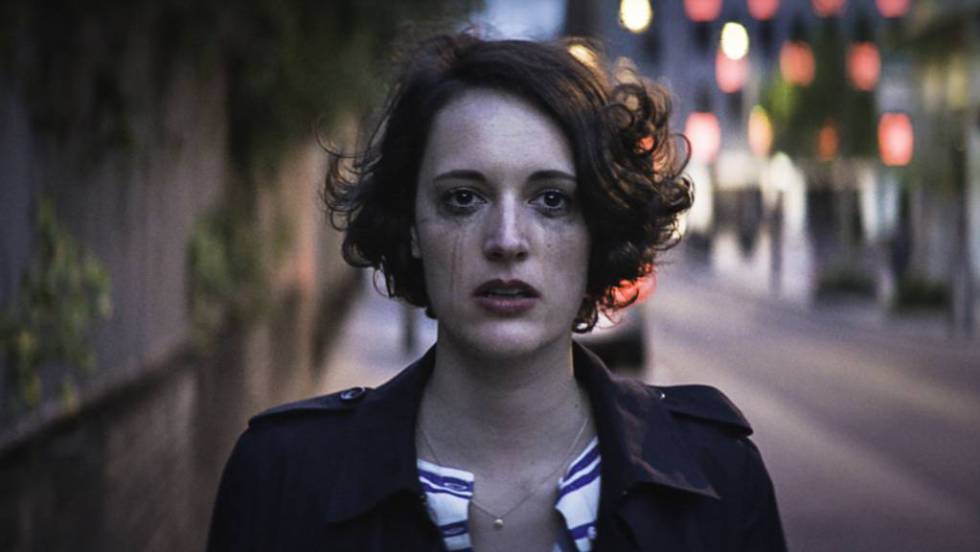 Phoebe Waller-Bridge is the undisputed queen of Fleabag, a little British gem broadcasted by the BBC between 2016 and 2019. In it, Waller puts herself in the shoes of a thirty-something woman trying to get her life back after the death of her best friend Boo.

Her peculiar way of seeing the world makes the comedy a paradigm of the new ‘post-modern’ woman, as defined by Paula Rabinowitz. Far from victimizing women, Fleabag is a statement that seeks to empower women to claim their (sexual) freedom.

Paula Rabinowitz asks herself in Soft Fiction. Políticas visuales de la emocionalidad y el deseo if there really is a “post-human woman”. If the bodies, the post-human ones, contain genres, stories or sexualities. It is well known that to be “post-human” is to go beyond and before time and manner, to be outside the spatial limits, chronological and generics that have sustained humanity for centuries.

As Virginia Woolf found in her research through the files of the British Museum, once-erudite men could ask a woman if she had genre, history or sex. If they were truly human, as if the term meant something to them. According to Focault’s theories, the rise of the human sciences closely follows that of female self-formation. However, is it true to admit that the demand for a space for the post-human will erase (again) the life and stories of women?

When women expressed their discomfort in the awareness groups of the 60s and 70s, their “humanity” remained a taboo. The feminists of the time wanted to portray the struggle of women to be heard in any social sector. In the basis of these groups was the tacit premise that each woman spoke the truth. But what if it really was not like that and they were lying? Well, maybe not lying but weaving a fable from their occasional encounters with the world. Feminism needed sincerity so that women could show their experiences as genuinely human. 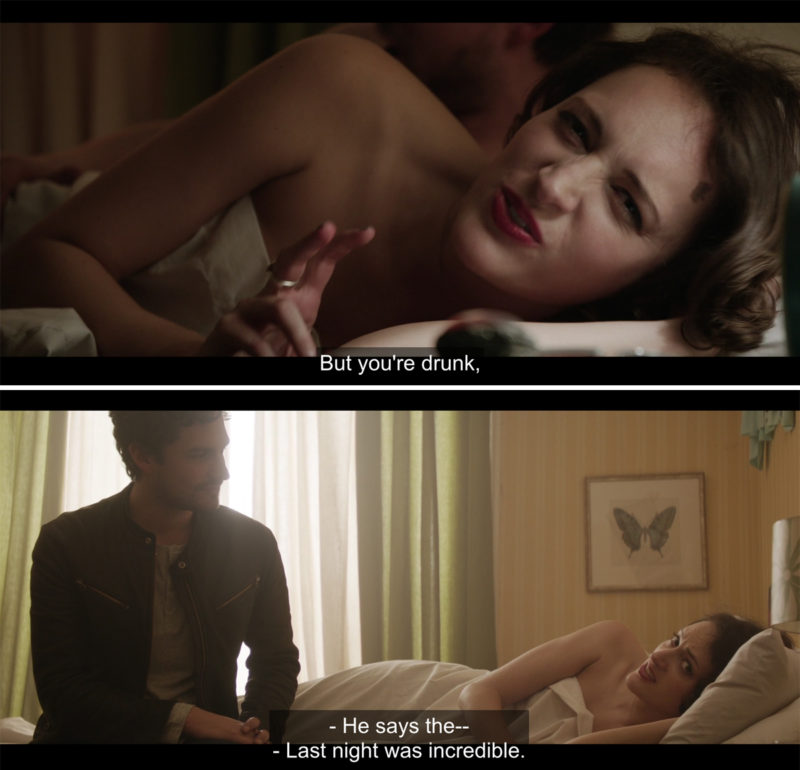 Can we trust Fleabag? Obviously, she has revealed her secrets in front of the camera

A Room of the One’s Own

The house of a friend can be a safe place in which to take off the mask because a friend will never betray a secret. Although, at some point, there could be a camera or a microphone and someone could hear you. At the end of the day when you tell a secret, unconsciously, you expect it to be spread, that is the essence of gossip. The secrets of middle class girls are disseminated, according to Rabinowitz, through sinks, telephone lines and eminently private female spaces.

But, what happens if there are hidden micros or cameras? Are these secrets still a secret? Are these stories true? Unconsciously, we still want to believe that it is so, although we already know for sure that they are public now. In Fleabag (Phoebe Waller-Bridge, 2016) we know the intimacy of its protagonist or what she wants to tell us. Amazon Prime’s British comedy becomes the paradigm of the post-human woman who shares her story, her gender and her sex with the public through an interesting mechanism that destroys the fourth wall.

It is especially interesting to compare Waller-Bridge’s ambition to portray fantasy and sexual liberation with Chick Strand’s work, Soft Fiction (1979). The women in Strand’s film overflow the picture and they stare at the camera to share their most intimate portraits, what they don’t dare to keep for themselves. One of them claims to have fantasized about becoming the curved railing of the Pasadena Art Museum. The way of speaking slowly and the intelligent use of the concepts invites us to think about on the terms of representation that objectify the bodies of women, as Rabinowitz states.

Fleabag does the same after breaking up with her boyfriend Harry (Hugh Skinner). In an inherently femenine space such as the bathroom, she confesses to the camera that she’s constantly thinking about sex. She likes the performance, the drama and the weirdness of the act. It seems exciting to be wanted. This sexual drive is inversely proportional to the emotional misery that Fleabag feels after the intercourse. 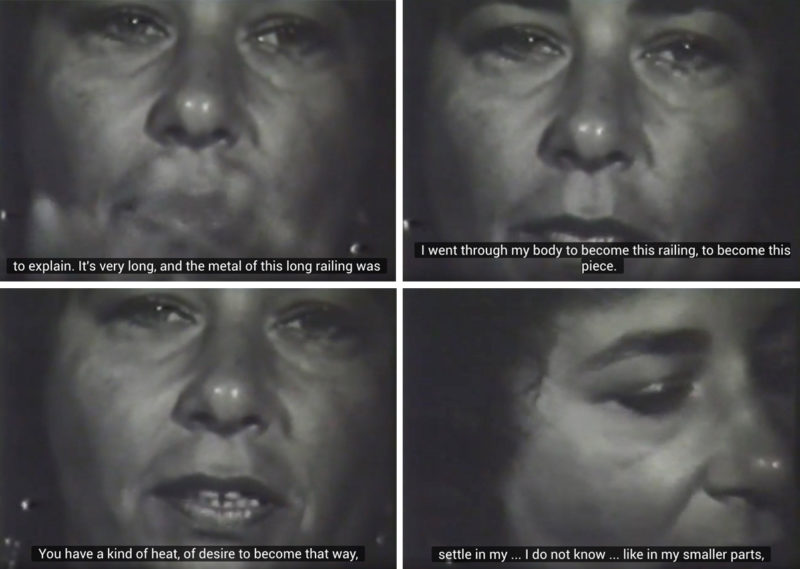 Precisely sex is shown as a recurring tool of female empowerment in the both of the works of Waller-Bridge and Strand. In the case of the British series, the sexual act becomes a kind of escape route in front of the inability of its protagonist to communicate his emotions. Let’s remember the aggression to his sister when she tries to give her a hug at their way out of a feminist talk. The dialogue she has with Harry and the Bus Rodent (Jamie Demetriou), becomes a sexual drive that rushes her into the arms of the attractive Arsehole Guy (Ben Aldridge). 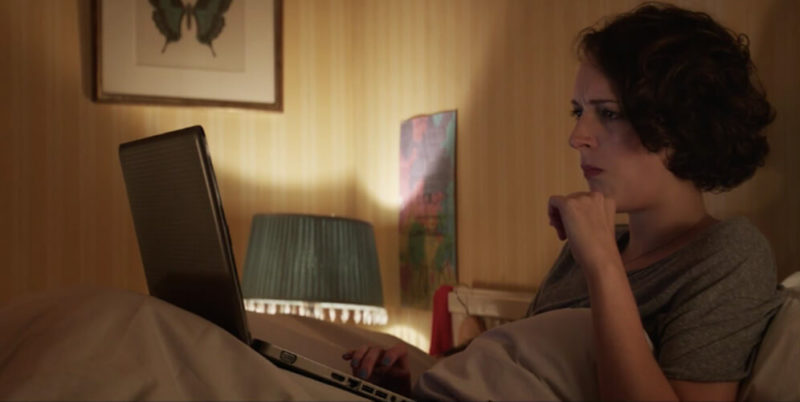 Fleabag masturbates over a Obama speech while her boyfriend sleeps.

And what about men?

Women are victims of men but they are also victims of women’s empowerment. If not, what is the need for Waller-Bridge to create a spiritual retreat so they can understand what it really means to “be a good man”? Not insulting a woman or recriminating her gender status because of a professional rise seems evident in the 21st century, but not in the hetero(patriarchal) society in Fleabag. There, men have control to gran credits, stop the meteoric career of their wives or decide from where will they will penetrate them.

The women in Fleabag, unlike those ones in Soft Fiction, think they have control but that is not the case. They lie handcuffed under the sexual impulse of man, actually, they can’t be without them. This is the case of Claire (Sian Clifford) who returns with her husband Martin after her sister confessed that he tried to kiss her. In the early 70s, Strand reflected on how female pleasures are represented in the patriarchal culture and now, almost fifty years later, Fleabag questions the validity of this female sexual freedom. “You would fuck anything, right?” Martin snaps at Fleabag.

In that brief margin left by the anguished thirties is where Fleabag tries unsuccessfully to fit, again and again. In Soft Fiction the power of the genre is tagged through its cliches while in the British comedy these cliches are expanded till the absurd. With that final plot twist, Waller-Bridge questions whether his speech is really honest. If during all this time she has been sincere with us and first of all, with herself. After all, it is not always easy to be a post-human woman.